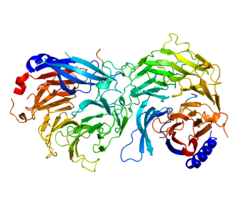 In the context of those practical rearrangements, these tertiary or quaternary constructions are usually referred to as “conformations”, and transitions between them are called conformational changes. Such modifications are sometimes induced by the binding of a substrate molecule to an enzyme’s energetic website, or the bodily area of the protein that participates in chemical catalysis. In solution proteins additionally undergo variation in structure by way of thermal vibration and the collision with other molecules. It has been estimated that average-sized bacteria comprise about 2 million proteins per cell (e.g. E. coli and Staphylococcus aureus). Smaller bacteria, corresponding to Mycoplasma or spirochetes comprise fewer molecules, on the order of 50,000 to 1 million.

An antibody’s binding affinity to its goal is awfully high. Many proteins are concerned within the process of cell signaling and signal transduction.